Knowledge
Welcome to our Knowledge Portal. 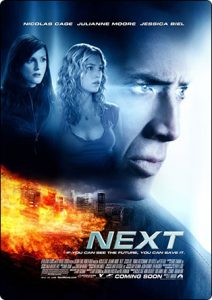 Cris Johnson (Nicolas Cage) can see into his future. He can only see two minutes ahead, with the exception of a vision he once had of a woman walking into a diner. Knowing no details other than the time, he goes to the diner twice each day at 8:09 to await her arrival. He works as a small-time magician in Las Vegas, where he supplements his income with gambling, using his powers to win against the house.
Cris draws the attention of FBI agent Callie Ferris (Julianne Moore), who has figured out his ability and wants to stop Russian terrorists from detonating a nuclear weapon. Before she can approach Cris, his gambling draws the attention of casino security. He stops an imminent robbery, yet is chased by security agents. Using his ability to forecast the actions of his pursuers, he eludes them and the Las Vegas police. Ferris tracks Cris to his home, but he escapes after foreseeing her arrival. Later that night, the casino's security chief is approached by two of the terrorists, is interrogated about Johnson and is then killed.
The following morning, Cris is at the diner again when he sees Liz Cooper (Jessica Biel), the woman from his vision. It turns out that not only can Cris see the future, but he can also see how his actions can affect that future. After envisioning different approaches—all of which fall flat—he intervenes when Liz's ex-boyfriend arrives. Knowing that she is heading for Flagstaff, Arizona, Cris charms her into giving him a ride. Ferris follows, while the terrorists decide to kill him. A washed-out road forces Cris and Liz to spend the night in a motel. With the weapon tracked to Los Angeles, Ferris convinces her superiors to let her bring Cris in. The terrorists follow in the hope that the agents will lead them to Cris.
Ferris confronts Liz near the hotel. Claiming Cris is a dangerous sociopath, Ferris asks Liz to drug Cris so that they can bring him in peacefully. Instead, Liz warns Cris, who tells her his secret. When she asks why he will not help the FBI stop the terrorists, he explains his limitations, noting the exception for events involving her. Asking for Liz to wait for him, he tries to escape from the FBI agents but is captured after saving Ferris from logs tumbling down the side of a mountain. Unable to kill Cris, the terrorists kidnap Liz instead.
In custody, Cris is strapped to a chair with his eyes held open and forced to watch television until he has a vision that can help the FBI. They expect him to see a report about the detonation of the bomb, but instead he envisions a broadcast from several hours in the future in which Liz is killed by a small bomb while strapped to a wheelchair and gagged with duct tape as bait for him. Cris escapes from captivity and races to the parking garage where she will be killed. Pursuing him to the garage, Ferris promises to help save her as long as Cris will help stop the bomb; she also sets up a plan to draw out the terrorists.
Using his ability, Cris helps the FBI track the terrorists to the port where they are based. When they arrive, Cris is able to walk right up to the terrorist leader and avoid being hit, by seeing where the bullets will go and dodging them. After killing the terrorists and saving Liz, they find that the bomb has already been moved. Ferris shows Cris a seismograph, hoping that he will see any tremors caused by explosions before they happen. As he stares at the screen he realizes that he has made a mistake and that he was too late: the bomb detonates out at sea and completely destroys the port, as well as the rest of the city.
The timeline reverts to Cris and Liz in bed at the hotel in Arizona, before Liz goes outside to be confronted by Ferris. Because of Liz's involvement in events, Cris has been able to envision everything that could happen leading to the nuclear explosion. "Every time you look into the future, it changes."
Cris calls Ferris and offers to help prevent the nuclear disaster, then asks Liz to wait for him.